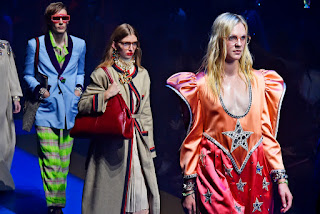 A glam rock extravaganza, with clear references to pop superstar, Elton John.
This eclectic and funky collection would certainly fit in with the Studio 54 era due to its clashing colours and exquisite embroidery.

Gucci transported the audience to Ancient Rome, with Greek and Roman statues, effigies of Egyptian gods, all set beside a cobalt blue runway. This created a dark and ominous set which excited fashion bigwigs and certainly captivated social media.

The collection was a clear standout at Milan. A colour pallet so vivid it denoted the revolution of the seventies music. Popping purples, daring reds and the hottest pinks were splashed onto Gucci's latest collection, with clashing patterns used in abundance; a trend perpetuated by Michele. 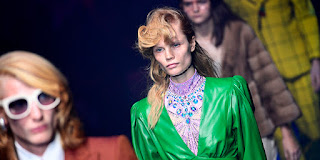 Glitter, sparkles and lots of stars were rampant throughout the collection - adorned on exquisite power blazers, dresses and sparkle tights. All these party outfits were a nod to Elton Johns earlier stage wear. Michele is a designer with a clear love of seventies nostalgia, it was only a matter of time he would reference Elton John, a pop star synonymous of this era. 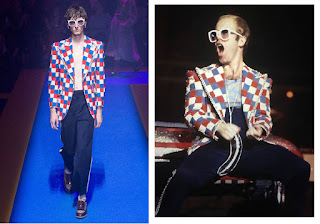 With signature stripes and the Gucci logo implemented onto the whole collection in cute and ironic ways, this created an excellent ready-to-wear collection.

Since his appointment as creative director of Gucci, he has been proactive in creating gender fluid and diverse collections for men and women.

"I am trying to push the idea of fashion, and to destroy the old codes of fashion,” said Michele. 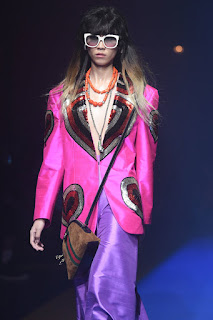 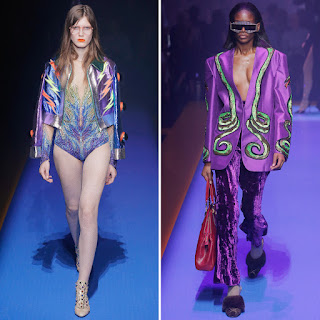 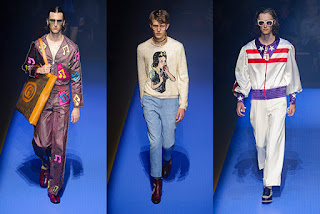 With a wealth of experience in creating fabulous, fashion statement garments for Gucci, this collection did not disappoint. Michele's vision has added youth and fun to the Italian fashion brand and really changed its direction.